MUSIKALISCHE EXEQUIEN by Heinrich Schütz – For All The Saints Concert

Capella Regalis presents Capella Regalis Men & Boys Choir and the Choir of the Cathedral Church of All Saints, with guest Baroque instrumentalists, in a production of the Musikalische Exequien by Heinrich Schütz (1635) directed by Paul Halley.

This special Halifax performance takes place on the 350th anniversary – to the day – of Schütz’s death on November 6, 1672. It is one of many musical events taking place across Canada this fall as part of SchützFest350, a coast-to-coast Canadian festival of music composed by influential Baroque composer Heinrich Schütz (1585—1672).  The Musikalische Exequien is a masterpiece of the early Baroque period and is the first Requiem ever composed in the German language. Regal and uplifting in style, the work comprises three movements scored for five-part to eight-part chorus alternating with small ensembles of solo voices and instruments. Schütz was a pioneering 17th-century composer revered for bringing the Italian music style of his teacher Gabrieli as well as Monteverdi to Germany and mixing it with that of his 16th-century predecessors in the Germanic style, a melding that was to influence the development of music in Germany for generations of composers to come, from J.S. Bach to Brahms. 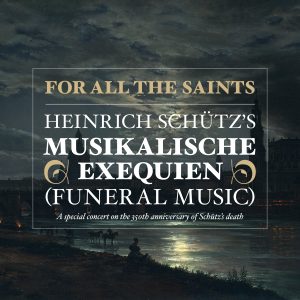