This past August, I had the privilege of being a part of an amazing choral experience in Berwick with the Nova Scotia Choral Federation’s Adult Choir Camp.  It was a bit of a surreal experience, as I got to wear many different hats at the same time (so to speak) as NSCF board president, a member of the Canadian Chamber Choir, as well as my “dad hat”, having the great joy of attending camp with my family.

Speaking on behalf of the NSCF board, I would like to express my great thanks to all those who took part in a marvellous week of music-making.  The sense of community that the choir camp atmosphere fosters is so very special, and it was a delight to have such a large number of singers taking part in ACC.  Thanks to those campers that have expressed an interest in taking part in volunteer activities with the NSCF’s restructuring – if you haven’t already done so, and feel you could lend a hand on an occasional basis, please let us know.  Many hands make light work!

Representing the Canadian Chamber Choir, I can say with all honesty that the CCC absolutely loves coming to Nova Scotia.  We feel so at home, have made so many good friends over the years, and know that we will have supportive and enthusiastic audiences.  A particular highlight this tour was our performance in Wolfville, where we honestly felt like it was a “rock star” atmosphere – it will be a long time before we are able to sing for an audience that vocal (a hometown crowd, if you will); this was quite overwhelming for us as performers.  Thank you so much to all those who came to hear us sing in Wolfville, Lunenburg, and Halifax – it was a joyful experience.

The highlight of my week, however, was being able to 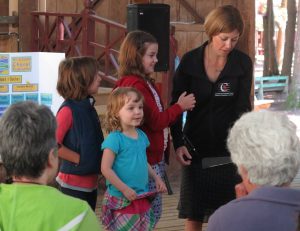 spend time with my family for the week.  Normally CCC choir tour means time away from family, but thanks to the NSCF, we were able to bring our children along to camp for the week, while my wife Laura sang in Adult Choir.  Thanks so much to NSCF for helping to set up child care for the week!  The magical family experience continued in that I was able to spend time with the family members of several other CCC’ers, and my kids were treated so well by everyone at camp.  Thanks to all those around who were part of “the village” in caring for us all, all week long – the safe, friendly atmosphere was so special.  My daughter Erica had such fun making her “concert debut” at the end of the ACC concert, and I got to watch (and dissolve into a puddle of goo) in pride.

If you haven’t taken part in the NSCF’s summer camp programs, I highly recommend you do so.  I am so filled with gratitude and fond memories, and hope that the same experience can be shared with as many people as possible!  Thanks to the camp committee, to Tim, to Heather, and all those who helped this all happen.