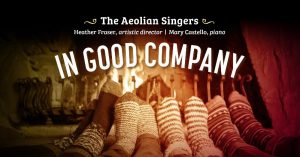 (from The Aeolian Singers) The Aeolian Singers (www.aeoliansingers.ca) open their 2019-20 season for the third year under artistic leadership of Heather Fraser, reflecting on the season and their camaraderie and love of singing with In Good Company.  The women’s choir will present a pair of these In Good Company concerts in November, and also take a singing road trip to Wolfville next March, closing Dartmouth Community Concerts season in the spring in an eclectic season of great music for women’s voices (Veritas).

The season opens with concerts (In Good Company) in Dartmouth (Grace United) and Upper Tantallon (St. Luke’s United) presenting music ranging from Henry VIII to Jane Siberry.  The program takes in the world of the Renaissance and Baroque, moving to modern takes on ancient texts, with glorious choral writing by contemporary Canadian female composers like Kelly Marie Murphy, Marie Claire Saindon and Laura Hawley.  They’ll even throw in a pub song of two.  The concerts take place on Saturday, November 23 at 7:30 p.m. at Grace United Church, Dartmouth and on Sunday, November 24 at 4:00 p.m. at St. Luke’s United Church, Upper Tantallon.

Collaborative pianist Mary Castello will be joining the Aeolians for the fall term. Staff accompanist for the School of Music at Acadia University, Mary also has an active freelance schedule, working with local soloists, Scotia Festival, Halifax Summer Opera Festival and the Nova Scotia Choral Federation.  She holds an MMus in Collaborative Piano Performance from McGill University and an Associate Diploma in Piano Pedagogy from Conservatory Canada.

On March 7, 2020 at 7:30 p.m., the choir performs This We Know at Wolfville Baptist Church with the Manning Chapel Choir and the Annapolis Valley Honour Choir.  Advance tickets are available form www.avhc.ca.

The April 25 DCCA concert (Veritas) grapples with the complex world of shadow and light, the seen and unseen, and the manipulation of what is “real.” Artistic Director Heather Fraser commented: “We’re excited to bring our Veritas program to Dartmouth Community Concert audiences. A timely commentary on our society, the texts and music explore deception and doubt, and celebrates the pursuit of knowledge, wisdom and truth.   A cornerstone of the program is Paul Halley’s Untraveled Worlds with Tennyson’s hopeful and invigorating text at this concert.”

Veritas will be repeated on June 7 with three additional commissioned works to be created by Canadian women composers.  The choir is planning to workshop these new pieces with other female singers and work with local composers in attached workshops.

Tickets are available for the Aeolians’ concerts from choir members and at the door.  You can also purchase them online from the choir’s website – www.aeoliansingers.ca.  All tickets are $20 regular and $10 for students.

Heather Fraser, who was appointed as Artistic Director commencing in 2017-18 is a native Nova Scotian who is immersed in the contemporary choral music world.  During the 2016-17 season she undertook a self-directed intensive study period with top choral conductors in the US and Canada. She is also currently Artistic Director of the award-winning Annapolis Valley Honour Choirs, and a choral specialist and accompanist with the Halifax Regional Centre for Education.

Now in their 44th season, the Aeolian Singers (www.aeoliansingers.ca) began in 1976 under founding director Claire Wall as a program of Dartmouth Continuing Education.  Since then, Jacqueline Chambers and Janet Gaskin also conducted them.  Champions of music for women, over the years they’ve commissioned many new works by a range of Canadian composers, including music by singer/songwriters Susan Crowe, Connie Kaldor and the late Raylene Rankin. They’ve shared the stage with a who’s who of musicians in their innovative and moving programs, and made three recordings, including the Canadian premiere of breast cancer oratorio, Where I Live, which they subsequently recorded, and performed with Symphony Nova Scotia and throughout Atlantic Canada, the U.K. and Europe.  Stay up to date on social media through Twitter and Facebook, or visit the choir’s website, www.aeoliansingers.ca to purchase tickets.