Thirty-six years ago, Jeff Joudrey had a vision of a chamber choir for his native Nova Scotia, and formed Halifax Camerata Singers, the award-winning ensemble that made its debut at Halifax City Hall in 1986. The choir has gone on to tour and record and to delight audiences with its eclectic repertoire of choral masterpieces, ranging from The Celtic Mass for the Sea to Bach and a bluegrass mass. They’ve collaborated with chamber musicians, opera singers and writers, becoming Halifax’s undisputed representative on the Canadian choral scene. The 2022-23 season marks Joudrey’s final one as Artistic Director, and the Camerata Board has narrowed the search for his replacement, to commence with the 2023-24 season.

First up for the choir on Saturday, November 5 (7:30 p.m.) at St. Andrew’s United Church is Legacies, a Remembrance-themed concert featuring music by living Canadian composers, including works by Eleanor Daley, Rupert Lang, Jeff Enns, Stephanie Martin, Larry Nickel, and the choir’s premiere of new pieces The Wedding (Hussein Janmohamed) and Sorrow into Song (Christine Donkin). Guest cellist Hilary Brown joins the choir for a performance of Jocelyn Morlock’s Exaudie. The program celebrates the memories of those we’ve loved and lost and the legacies of those who bring joy and beauty to our lives. Masks are optional but recommended.

Tickets for Legacies are available from tickethalifax.com, and the Legacies concert will be livestreamed through Side Door Access. Concertgoers can also purchase a two-concert pass (Legacies and Saturday evening performance of Considering Matthew Shepard) and save 10%.

Founded by Artistic Director Jeff Joudrey in 1986, Halifax Camerata Singers includes performers from many parts of Nova Scotia and is Atlantic Canada’s leading chamber choir. Supported by the Canada Council for the Arts, the Lloyd Carr-Harris Foundation, the SOCAN Foundation, the Province of Nova Scotia/Arts Nova Scotia, Halifax Regional Municipality and individual donors and corporate supporters, the choir has distinguished itself by performing exciting choral repertoire from many periods and styles, with special attention to Canadian music. Winners of Music Nova Scotia’s Best Classical Recording in 2016 and nominated for an ECMA in the same category in 2017, the choir also won the Healey Willan Grand Prize in the 2010 National Competition for Canadian Amateur Choir. Camerata often collaborates with chamber ensembles, Symphony Nova Scotia, and other musicians. Their five recordings are for sale at Taz Records, online and through iTunes, and are distributed through Naxos of America, Inc. through Halifax’s Leaf Music catalogue. Camerata was nominated for a 2021 Best Classical Recording by Music Nova Scotia for Music of the Spheres.

Halifax Camerata Singers thanks its donors and funders, the Canada Council for the Arts, Arts Nova Scotia, Halifax Regional Municipality, and the Lloyd Carr-Harris Foundation. The choir acknowledges that we are located in Mi’kma’ki, the ancestral and unceded territory of the Mi’kmaq People. This territory is covered by the Treaties of Peace and Friendship first signed in
1725. 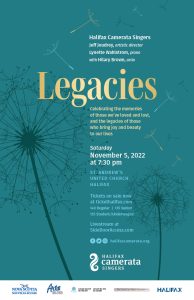