King’s Chorale Presents There Will Be Music

Wolfville Baptist Church
Sunday December 12, 2021 at 3pm
Tickets available from choristers and at the door 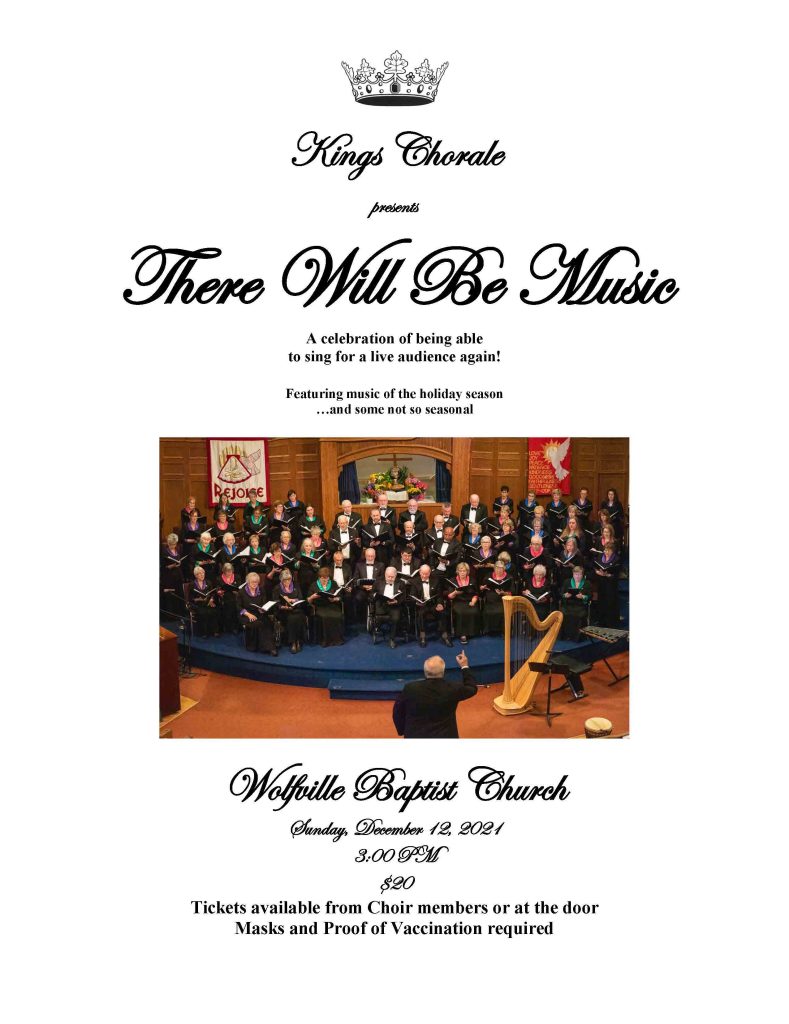 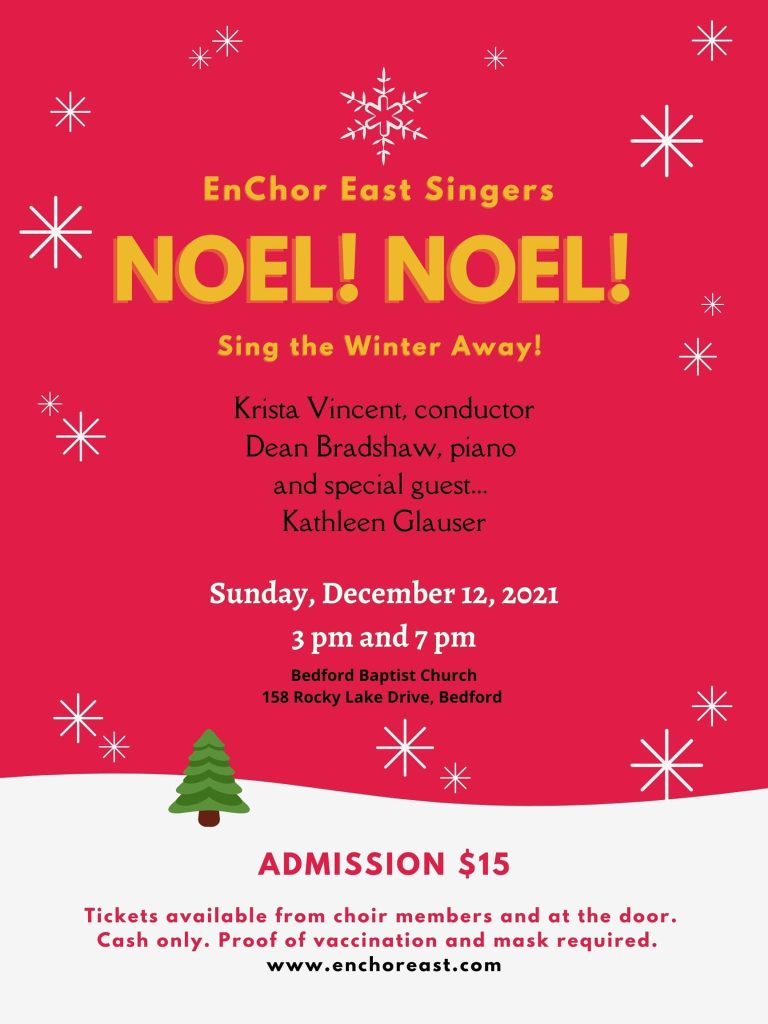 Christmas with the Cape Breton Chorale 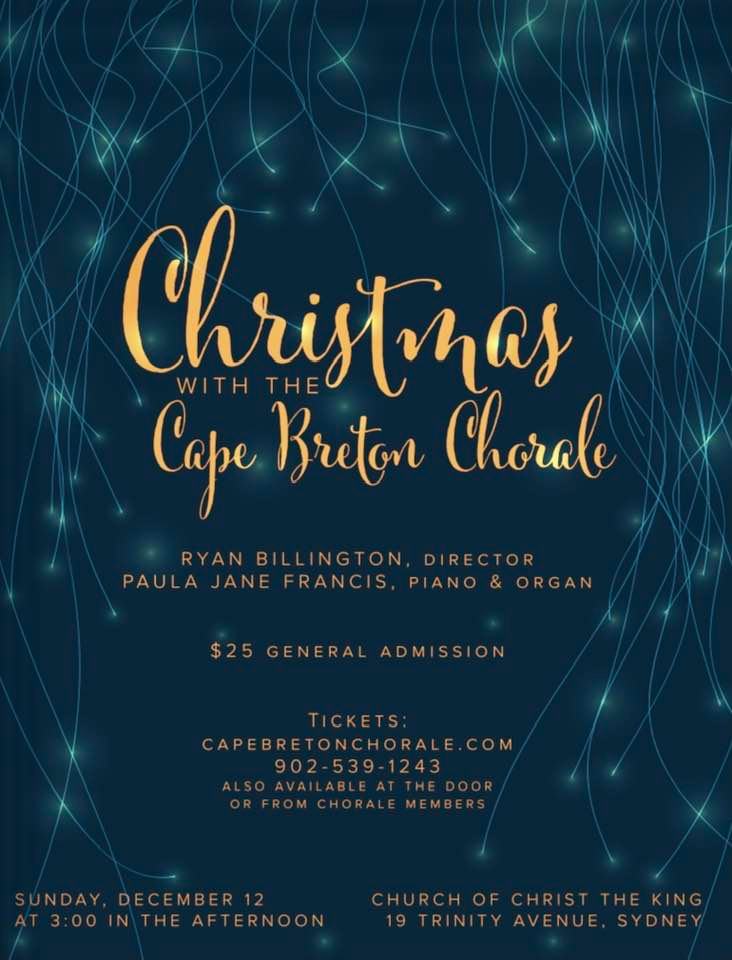 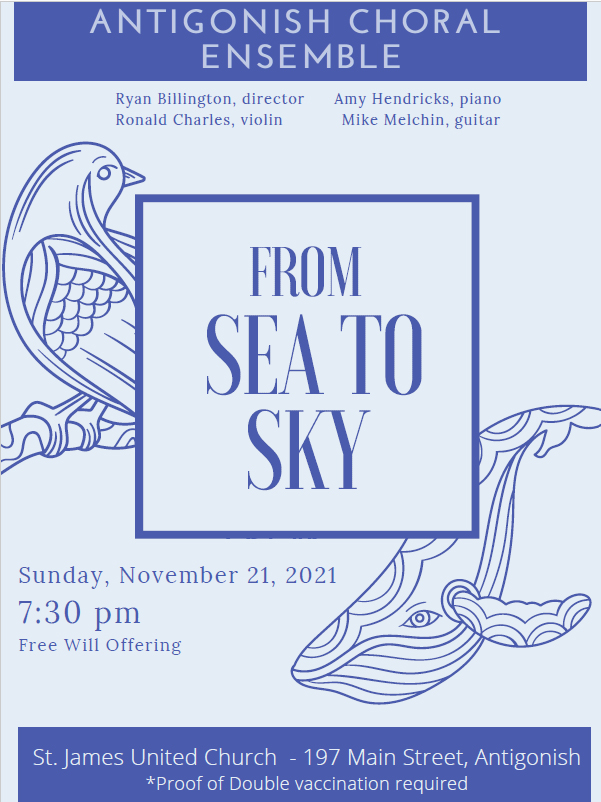 Since the beginning of the COVID pandemic in March of 2020, the question every musical ensemble had to consider was: How do we keep going? Because choristers are inherently creative people, the answer kept changing to suit the requirements of the moment. Some rehearsals included eight members only, live-streamed to the rest of the choir. Other rehearsals were for larger groups, but always distanced, always masked. As anyone who has tried it knows, singing through a mask is difficult at the best of times. But everything becomes easier when you approach the task with positivity and a sense of humour.

And now, for the first time since the fall of 2019, we’re able to perform for you again. This performance is titled “The Joy of Singing”, because throughout these difficult times, it is the joy we feel being in each others’ presence, singing beautiful music, that has sustained us. Our performance will include excerpts from J.S. Bach’s B Minor Mass and the opening chorus of BWV 61:Nun komm, der Heiden Heiland. We will also perform two choruses each from “Solomon” (Handel) and “Higgaion: Images of Hope and Fear” (Ewer), as well as Morten Lauridsen’s beautiful “Lux Aeterna.”

A live-streamed version of our annual Festival of Carols to raise funds for Christmas food boxes for families in need. Free will offering.
Featuring
• The Jubilate Singers, under the direction of Terry Hurrell with piano and organ accompaniment by Gregory Doyle
• Ardyth & Jennifer, with Pam Mason and Clara Whitman
• The Halifax Horn Quartet
• Storytellers: Jamie Bradley and Gillian Fowler
To get updated and receive the link to the virtual concert:
• Like our Facebook page (Jubilate Singers & Friends https://www.facebook.com/Jubilate-Singers-Friends-115401170368076) or
• Subscribe to St. Mark’s YouTube channel
https://www.youtube.com/channel/UCE_TZGafQql_pmktU-akA-w or
• Email jubilatesingers2020@gmail.com to get e-mail updates!
If you wish to donate in advance, you may do so
• By e-transfer: jubilatesingers2020@gmail.com, Include your name and address for tax receipt in the “message” field.
• By cheque: to St. Mark’s Food Box Committee and mailed to or dropped off at St. Mark’s Church, 5522 Russell Street, Halifax N.S. B3K 1X2
• By credit card or Pay Pal through Canada Helps
https://www.canadahelps.org/en/dn/m/67072.
Any support, small or large, is gratefully accepted! Tax receipts are issued for donations of $15 or more. 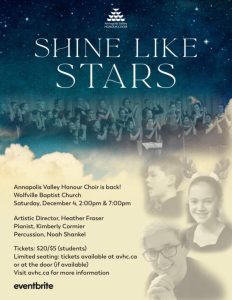 The Annapolis Valley Honour Choirs are thrilled to be back in person and are ready to sing you into the holiday season once more! Come hear these wonderful singers raise their voices together in “Shine Like Stars!” – Saturday, December 4th, 2:00pm and 7:00pm at the Wolfville Baptist Church.

“Shine Like Stars!” will feature all three AVHC choirs singing uplifting, fun, sparkly music that celebrates finding those bright lights in the darkness and moving forward together! A laugh and a good cry is just what we all need, and this concert will not disappoint. This event also marks the return of our bake sale where you can pick up all your holiday goodies!

As singing communities of all sorts begin to reconnect across the country, please join the AVHC for this concert and make our return to live performance an event to remember!

Best reserve your seat now, as seating is limited to allow for some audience distancing and we are 80% sold out! Proof of vaccination and masks will be required. We are also offering you the opportunity to watch a live stream of the concert from the comfort of your own home! This is a wonderful opportunity to include those who may be isolating due to health reasons, people who live too far away to attend! (2pm show will be broadcast but link will be available to watch for 48 hours)

GET YOUR TICKETS HERE! 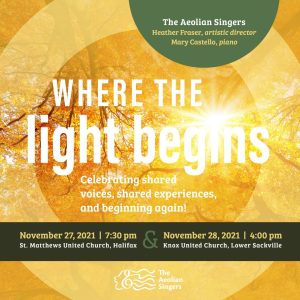 YOU’RE INVITED!
Get your tickets now – so you don’t miss out! “Where the Light Begins” is going to be a wonderful program. Please join us Sat. Nov. 27 or Sun. Nov. 28
Tickets available on our website: www.aeoliansingers.ca
Tickets also available at the door (cash only).
Adults $20, Students/Underwaged $10
AND Live Stream Nov. 27 – $15pp
Can be live streamed until midnight November 29, 2021
November 29, 2021 By NSCFMGR e-notes • Front Page 0 Comments 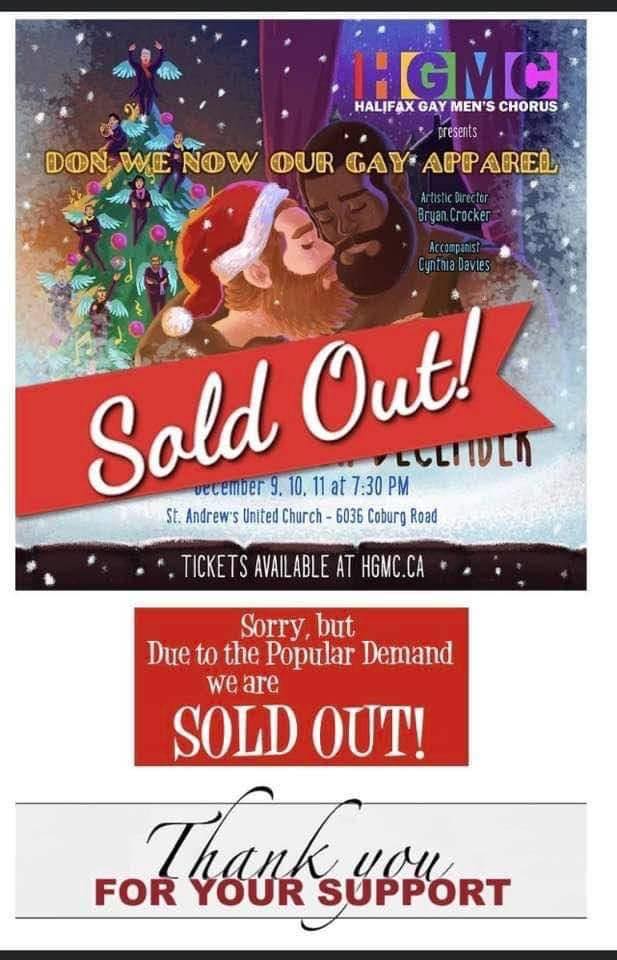 Halifax Camerata Singers: For the Love of Life! 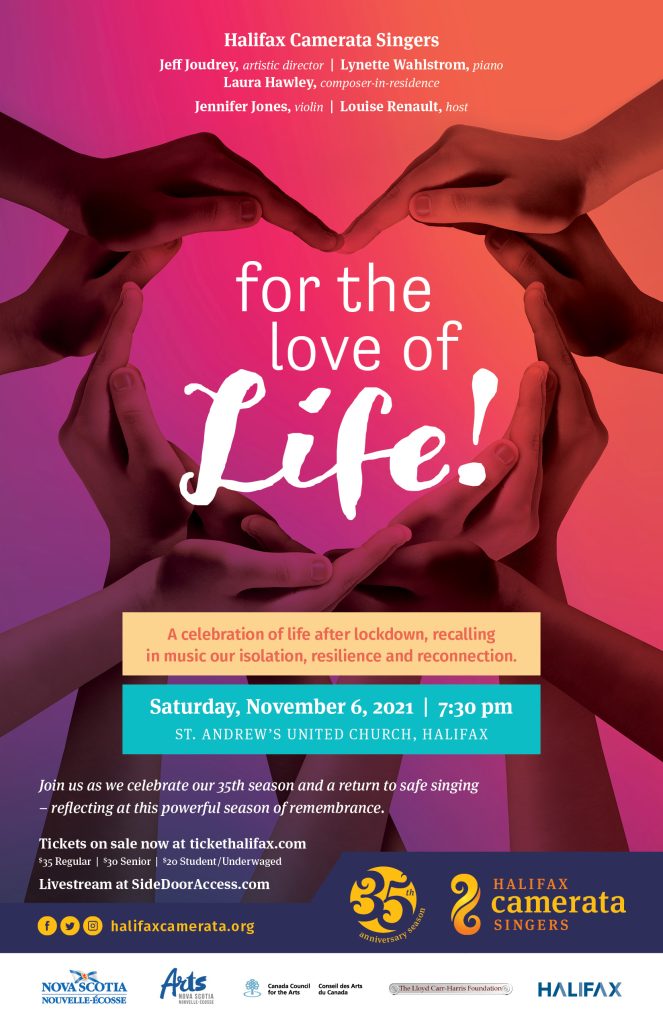 (Halifax/K’jipuktuk, NS) Halifax Camerata Singers celebrates its 35th anniversary season with moving repertoire reflecting issues that matter – compassion, reconciliation, diversity, and equality – with both in-person and virtual concerts at St. Andrew’s United Church (Halifax).  Atlantic Canada’s premiere chamber choir, the 28-voice ensemble is marking their milestone through an eclectic musical season and is offering its fans a discount ticket price for its first concert on November 6.

The Remembrance-themed concert, For the Love of Life, takes place on Saturday, November 6 at 7:30 p.m. with special guests, Jennifer Jones (violin) and Louise Renault (host). The opening concert celebrates life after lockdown, recalling in music our isolation, resilience, and reconnection.  Repertoire includes choral works by acclaimed composers Ola Gjeilo, Moses Hogan, Mark Sirett, Jake Runestad, Srul Irving Glick, Larry Nickel and Dolly Parton. There will be two premieres of new works by Canadian women composers:  The Last Evening (Laura Hawley), and Stephanie Martin’s In Mortal Key, inspired by a Jewish prayer. This concert will be presented both in-person, and on livestream through www.sidedooraccess.com.

Tickets for the in-person concert are $35 regular, $30 for seniors and $20 for  students and the underwaged through Ticket Halifax.  The virtual concert, available livestreamed and for up to 48 hours after November 6, is $18 through Side Door Access.

Founded by Artistic Director Jeff Joudrey in 1986, Halifax Camerata Singers includes performers from many parts of Nova Scotia and is Atlantic Canada’s leading chamber choir. Supported by the Canada Council for the Arts, the Lloyd Carr-Harris Foundation, the SOCAN Foundation, the Province of Nova Scotia/Arts Nova Scotia, Halifax Regional Municipality and individual donors and corporate supporters, the choir has distinguished itself by performing exciting choral repertoire from many periods and styles, with special attention to Canadian music. Winners of Music Nova Scotia’s Best Classical Recording in 2016 and nominated for an ECMA in the same category in 2017, the choir also won the Healey Willan Grand Prize in the 2010 National Competition for Canadian Amateur Choir. Camerata often collaborates with chamber ensembles, Symphony Nova Scotia, and other musicians.  Their five recordings are for sale at the Symphony Nova Scotia Boutique, Taz Records, online and through iTunes, and are distributed through Naxos of America, Inc. through Halifax’s Leaf Music catalogue. Camerata is nominated for a 2021 Best Classical Recording by Music Nova Scotia for Music of the Spheres.

Halifax Camerata Singers thanks its donors and funders, the Canada Council for the Arts, Arts Nova Scotia, Halifax Regional Municipality, and the Lloyd Carr-Harris Foundation. The choir acknowledges that we are located in Mi’kma’ki, the ancestral and unceded territory of the Mi’kmaq People.  This territory is covered by the Treaties of Peace and Friendship first signed in 1725.