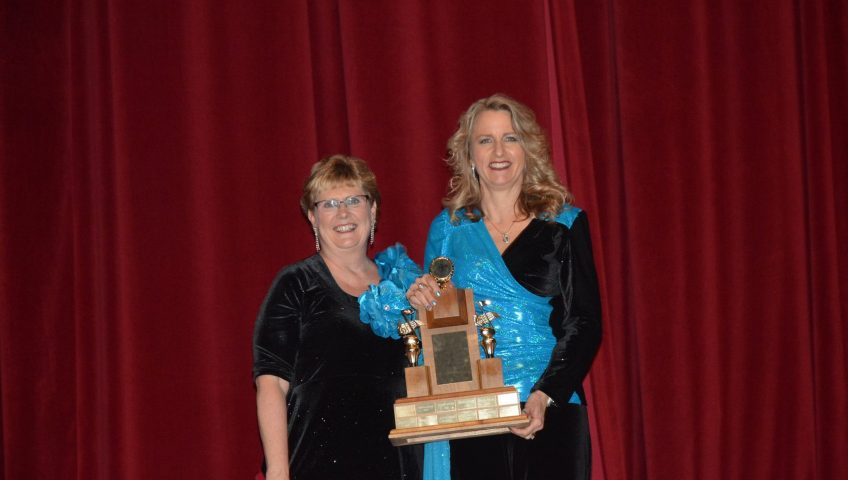 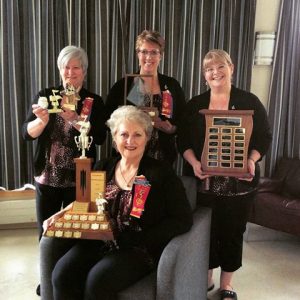 The ScotianAires received the highest score of the six competing choruses in the chorus contest with their ballad “What’ll I Do?” and a lively medley of “Steppin’ Out With My Baby” and “I Can’t Give You Anything But Love”. Following very closely in second place were the Sea Belles of Saint John, NB whose energetic and entertaining presentation of “Joint is Jumpin’” earned the best performance score of the evening. The five top placing choruses also qualified to compete in Harmony Inc.’s International Competition to be held this year in Halifax in early November, 2017.

Tonic!, which is made up of four ScotianAire members – Marion Fraser-Pritchard, Cathy Hunter, Adele Merritt and Mary Gareau – competed with seven other quartets and turned out to be a triple threat! Tonic! took home the first-place Wona Wright Memorial Award, the Karen Gordon Memorial Award, which went to the quartet with the highest performance score, and the Kathryn Ryan Memorial Trophy for the most improved quartet.

Tonic! will be joined by two other new quartets, Gotta Sing!!! from the Elm City Echoes and enJOY! from the ScotianAires and the Valley Voices as qualifiers from the Atlantic Region at the international competition.

ScotianAires director Sue Kember was excited and honoured to retain the championship and was also pleased that the chorus improved on last year’s score. “With all of Area 1 working harder to improve, I am thrilled with how the ScotianAires performed under the pressure of the contest stage” Kember related. “The coaching and hard work certainly paid off, but it is also the heart of every member wanting to sing her very best and perform the best she can. It is extremely gratifying.”

Participants commented very favourably on the overall experience. “What a weekend!” exclaimed one of ScotianAires newest members Tanya Reid. “I’ve made so many memories, learned so much, made stronger bonds, and laughed and cheered so hard. I love this craft!”

Director Kember also hopes the success of Tonic!, enJOY! and the ScotianAires will help to raise the profile of women’s a cappella singing in the Halifax region. “We’re always looking to expand our membership, so if you’re a woman who loves to sing, we want to hear from you.”