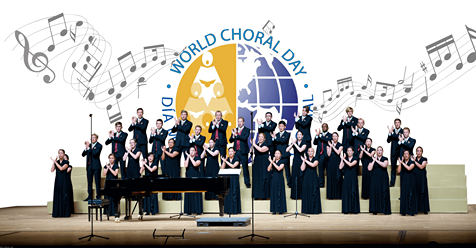 Join choral ensembles around the globe in celebrating World Choral Day  to show that “our choral family contributes through music to break down the artificial barriers of politics, ideologies, religions, and racial hatred that separate human beings” (Alberto Grau at the launch of IFCM’s World Choral Day, 1990). All choral ensembles are invited to register concerts/events that happen between November 11 and December 16 (Remembrance, Advent, Christmas, etc.). Choirs are encouraged to include the World Choral Day proclamation in concerts, use the logo in programs and advertising, and publicize their participation in World Choral Day through social media. Let’s have a massive Nova Scotia and Canadian presence on the World Choral Day website to demonstrate belief that “choral singing, an integral part of the Canadian cultural experience, has the power to build communities and transform lives.”

An international choral event to extol the values of solidarity, peace and understanding!
Since 1990 thousands of choirs have been joining in the celebration of World Choral Day on or around the 2nd Sunday of December.

Millions of singers across the globe have been involved in World Choral Day concerts, festivals, sing-alongs, choral seminars, days of friendship and other events.

The World Choral Day is an initiative of Alberto Grau from the Latin American Vice-Presidency of the International Federation for Choral Music, proposed and approved by the General Assembly of IFCM held in Helsinki in August, 1990, within the framework of the 2nd World Symposium on Choral Music:

“The world is living through severe and continuous crisis of self destruction. There are no possible reasons that can justify these actions. The majority of the human race wants to live in peace with dignity. It is time to show, with more power and strength, that our choral family contributes, through music to break down the artificial barriers product of politics, different ideologies, religious differences, and racial hatred that separate human beings. We must be able to show that MUSIC, the divine art, is more than the mere search of formal perfection and interpretative beauty, music should serve to extol the values of solidarity, peace, and understanding . We cannot work isolated, we have to make all possible efforts to have our voices heard and to let music work its own paths of communication.”