A Farewell for Maureen MacLean from Middleton Choral Society 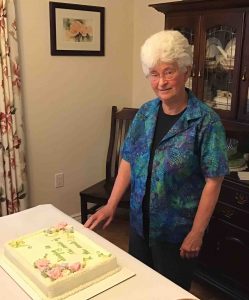 On the evening of July 8, members of the Middleton Choral Society gathered at a private home for a reception to honour their retiring director Maureen MacLean. Maureen, who began as the community choir’s accompanist, has been director for 43 years. A musical icon in Middleton, she was a successful elementary Music teacher there; until this year she also served as president of the Annapolis Valley Centre of the Royal Canadian College of Organists (RCCO). She is a valued piano teacher still, as well as organist at St. Alphonsus Catholic Church in Bridgetown.

The choir presents two formal concerts each year, a seasonal one at Christmas and one in the spring. As well, an informal program has been presented at Mountain Lea Lodge each December. The choir’s dedicated membership is, on average, 35 unauditioned singers, with excellent distribution in all four vocal parts. Maureen’s devotion to the NSCF Choir Camp in Berwick each summer is legendary, having attended the earliest one. Each year Maureen makes sure that MCS grants a Choir Camp scholarship to a young person in the community. As well, Maureen has supported the High C’s Choral Festival held in the Digby area each May. MCS has done choir exchanges with other community choirs; the choir has also performed in Broadway musicals in co-operation with the Greenwood Players.

Maureen gets her repertoire ideas from various sources. As a member of NSCF, she uses its extensive choral library. At conferences and choir camps she exchanges notes with fellow musicians. In preparing programs, she goes through MCS’s own library, borrows from the NSCF library, and purchases a few new pieces each year. She is careful to choose a varied program: Canadian compositions, sacred and secular selections, jazz and gospel arrangements, folk songs, and show tunes are all considered. At the top of any playlist would be compositions by our own Nova Scotia composers.

Recognizing that singing is a physical endeavour, Maureen uses the first 20 minutes of rehearsals for vocal warm-ups. Borrowing freely from musical friends, she constantly varies the exercises and drills. Choristers gain an appreciation of their own voices, as well as working within a group of fellow singers. On occasion, she has brought in an expert musician to conduct a workshop: a frequent visitor has been composer Gary Ewer. In 2005, MCS commissioned Gary to write “Nova Scotia Is Our Home” to celebrate the 400 th anniversary of the Port Royal settlement. At this time, Stephen McNeil, MLA for Annapolis, moved a resolution in the House of Assembly: “Therefore be it resolved that all members of the House extend congratulations to the Middleton Choral Society and, in particular, director Maureen MacLean, for all their hard work and effort on launching the premiere performance of “Nova Scotia is Our Home.”

The final performance of MCS with Maureen at the helm occurred on Sunday November 17 before a packed house in Evergreen Theatre in Margaretsville. A distinct feature which has become a trademark of MCS’s concerts is the participation in the program of individual choir members as vocalists or instrumentalists in support of the regular choral works. Following the concert, choir members enjoyed a pot luck at Margaretsville United Church. Once COVID-19 has run its course, news of a new director and renewed energy for Middleton Choral Society will be forthcoming. Stay tuned!
John A.Montgomerie, September 2020