Announcing the Results of the 4th NSCF Young Composer’s Competition

Halifax-based composer Peter Fillman has been selected by the jury as the winner of  the Nova Scotia Choral Federation’s  4th Young Composer’s Competition for his composition See How Low the Moon Hangs.  In addition, the NSCF is  pleased to share that the jury also selected an honourable mention for the competition; Peregrina by composer Cameron Slipp. Both pieces will be premiered by the Nova Scotia Youth Choir, conducted by Christina Murray, as part of  the NSYC’s  30th Anniversary Celebration. 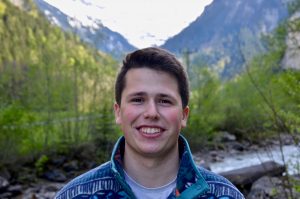 Peter Fillman is a Halifax-based composer and guitarist entering his fourth year of a Bachelor of Music degree in Composition. Peter began his music degree studying guitar under Douglas Reach, and this past year began studying composition under Dr. Jerome Blais. Originally from New Brunswick, Peter was actively involved in arts programming at Rothesay Netherwood School and has performed as a part of the New Brunswick Youth Orchestra and as a chorister with the Dalhousie University Chorus. He hopes to study a Masters of Composition following his undergrad and is interested in pursuing a career in film composition.