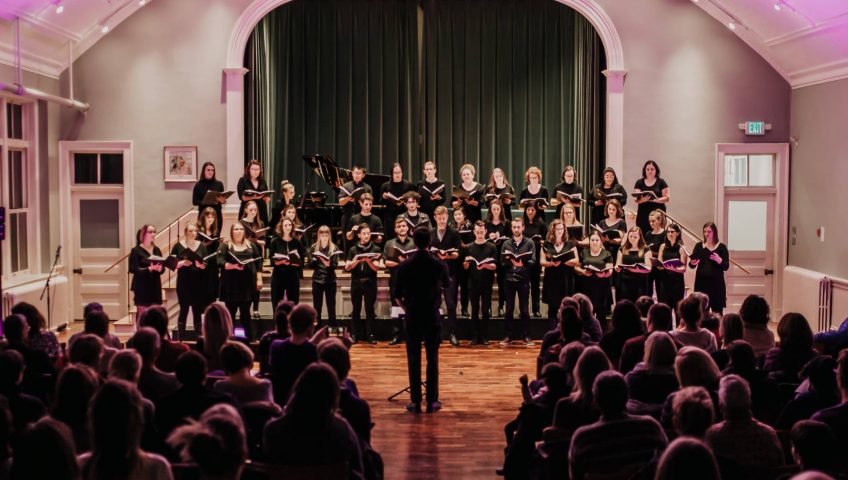 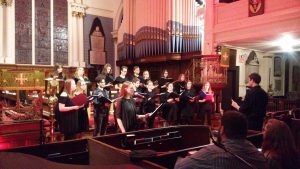 As 2018 comes to a close, we’d like to reflect upon the last few months and what they meant for Choirs for Change. This year would not have been possible without the nearly 75 members (a record for us!) who are involved with our three choirs, Spíra, Polaris, and Eastern Horizon. Thank you!

Rehearsals started up in September after a brief break over the summer months. Spíra and Polaris were both joined by guest conductor Geung Kroeker-Lee, the artistic director of Prairie Voices in Manitoba. Arts Nova Scotia’s support allowed Polaris to have a weekend retreat to Hubbards with Geung. The retreat allowed choir members to learn from Geung’s expertise, to sing, and to grow closer as a community. There were also many end-of-summer activities to fill the rest of the time, such as kayaking and swimming in Hubbards Cove.

The retreat was, in part, a chance for Polaris to prepare for their performance for Nocturne Halifax. On October 13th, Polaris sang Jason Noble’s song, “Furiouser and Spuriouser,” six times over the course of the night. This marathon of an evening saw the choir perform to a total 1,500 audience members!

Choirs for Change’s next event was a joint venture by Spíra and Polaris to fundraise for the year ahead. Spíra and Polaris performed a number of songs separately and together. This event featured our talented choir members in a series of individual performances as well, which helped make the evening a resounding success.

Most recently, Choirs for Change collaborated with El Jones, the Melgit’at Women, the Maritime Bhangra Group, and Rebecca Cope-Moore to host Celebrations, an event that gave space for a number of perspectives on how different people and cultures choose to celebrate. The Lilian Piercey Concert Hall was a full house on the evening of the event, but audience members did not stay seated for long as the Maritime Bhangra group invited everyone to dance with them. El Jones and Spíra collaborated on a piece together, and the Melgit’at Women and Rebecca Cope-Moore wowed us with their beautiful singing and drumming.

We are so grateful to everyone who has helped make this year such a success, and we look forward to sharing more meaningful music with you in 2019! However, this year is not yet finished. On December 10th and 12th, Eastern Horizon is hosting auditions for an upcoming event in February. For more details, contact us at choirsforchange@gmail.com.

This season has been filled with so many wonderful and successful events so far, and we have our board, our singers, and all of our supporters to thank. We couldn’t have done it without you!