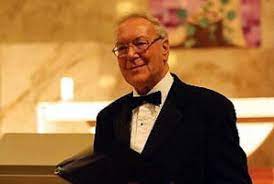 During the COVID 19 pandemic, retired music teacher and longtime NSCF member, Terry Hurrell, has found the time to be at his desk, to dig into his filing cabinets, and to register some of his music compositions and arrangements with SOCAN – 13 to date – including The Angel Song – composed in 1956 (!) and many composed later.  Terry has also explored publication, mainly through Cypress Choral Music..  Larry Nickel of Cypress Choral Music . This year, four of Terry’s works have been published.

If you’re tired of the same Christmas descants and discover that you cannot legally record them, then check out new ones by Terry Hurrell by including “Once in Royal David’s City; O Little Town of Bethlehem; Hark! The Herald Angels Sing.” Terry is able to supply them and give permission for them to be used.

Some Nova Scotia composers and arrangers have done arrangements for the Robbie Song Project, which has commissioned over 30 choral arrangements of the music of the late Robbie Smith accessible to choirs.  This was Robbie’s dying wish. The project is managed by the Nova Scotia Choral Federation and Kathleen Glauser, namingthetwins@gmail.com , Robbie’s singing partner. All arrangements are available through the NSCF Library, so that now they are accessible to member choirs of NSCF.  Many of the arrangements are also available through Cypress Choral Music https://cypresschoral.com/composers/robbie-smith/ .

So, for some composers in Nova Scotia and, no doubt, other places too, the COVID 19 pandemic has been a time of productive and creative work in music composition and arranging.