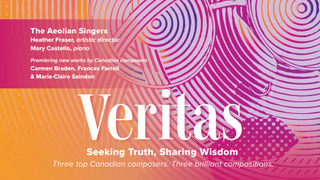 The Aeolian Singers are celebrating their 45th season doing what they love most: championing the voices of Canadian women in music. After a successful first concert with local composer and conductor Fran Farrell, the choir is excited to invite you to the second concert of their  VERITAS program. This concert will feature the world premiere of “Flat Earth”  by Marie-Claire Saindon.  To make this event even more special, Marie-Claire will be discussing the French-Canadian choral canon from traditional folk songs to the contemporary. In addition to each world premiere, the choir will also perform past program favourites and festive seasonal selections.
The concert is planned to have both in-person and virtual options for attendance. Full event details and ticket information:
www.aeoliansingers.ca/veritas

Composer: Marie-Claire Saindon
World Premiere: Flat Earth
Choral Demonstration: “Beyond the French-Canadian Canon: Tradition and Innovation”
When we say “French-Canadian choral piece”, what first comes to mind? If you thought of traditional loggers/fishermen songs or Christmas carols, you’re not the only one. But did you know that there is also a strong practice of modern French-Canadian choral music? Come explore what are some of those sonorities!