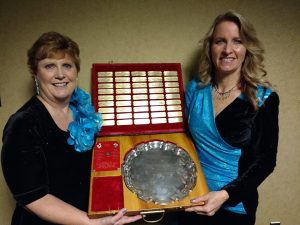 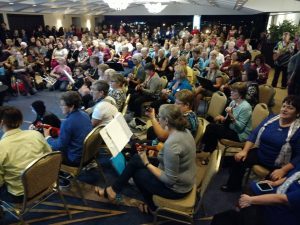 The hard work, the months of rehearsal and preparation, the extra coaching sessions, all paid off for the ScotianAires who recently competed at Harmony Incorporated’s International Convention and Contests for women’s barbershop choruses and quartets. This year’s event was particularly special because it was held in our hometown of Halifax at the World Trade and Convention Centre.

Competing with twenty-three choruses from across Canada and the United States, the ScotianAires placed sixth, attaining our highest standing at International since the 1990s. In addition to being the top scoring Canadian entry in the competition, the ScotianAires were awarded the Ladies Association of British Barbershop Singers trophy for the highest performance score for a non-medalling chorus.

ScotianAires director Sue Kember shares the impact of the experience. “It is so wonderful to work hard for something and have an amazing result. To work with such an impressive group of women is so rewarding and humbling for me, I consider myself extremely lucky. Sharing this passion for a cappella singing with them is fantastic! “

In the quartet competition, two foursomes from our chorus ranks (along with an import from the Valley Voices in Kentville) qualified for the top ten quartet finals held on Saturday afternoon. Newcomer enJOY! wowed the crowd in their first international competition, receiving the fifth-place medal. It was an emotional win for these four friends. Lead Jennifer Cleveland expresses their excitement. “We’re having a blast so far! Singing together over the last ten months has been so much fun for the four of us, and we’re so honoured to have won the fifth-place medal this year! We’re already hard at work, making plans for working towards our next goals!”

Atlantic Champion quartet Tonic! had their best result since they began competing, coming in eighth in very close standings with only four points separating the sixth, seventh and eighth placings.  Tonic! expressed their elation at being part of this successful event.  “Wow! What an amazing ICC weekend in Halifax! Tonic had such a blast! … Congratulations to everyone! Area 1 ROCKS!”

Indeed it was a very good contest for all choruses and quartets from the Area 1 (Atlantic) region with five Area 1 groups in the chorus finals and all three Area 1  quartets making it to the final quartet round on Saturday.

This year also marked a first for Harmony, Incorporated as the competition portion of the event was made available live through streaming service FloVoice.  As a bonus, FloVoice shared video interviews, daily summaries and behind the scenes spots on their Facebook page.

The competitions were not the only activity during the four-day event.  The convention portion of the gathering included education classes, a marketplace, social events and special performances including a couple of appearances by Barbershop Harmony Society award-winning quartet, Throwback.   And now and then, a few lucky customers of the food court at Scotia Square would hear an impromptu performance by a quartet or chorus as singers traveled from the hotel to the competition venue.

Arguably the most popular social gathering on the final Saturday night was that hosted by the Area 1 choruses featuring a sing-along with over sixty convention delegates from across Canada and the United States playing their ukuleles!  The camaraderie and friendship on display was truly the hallmark of the event.