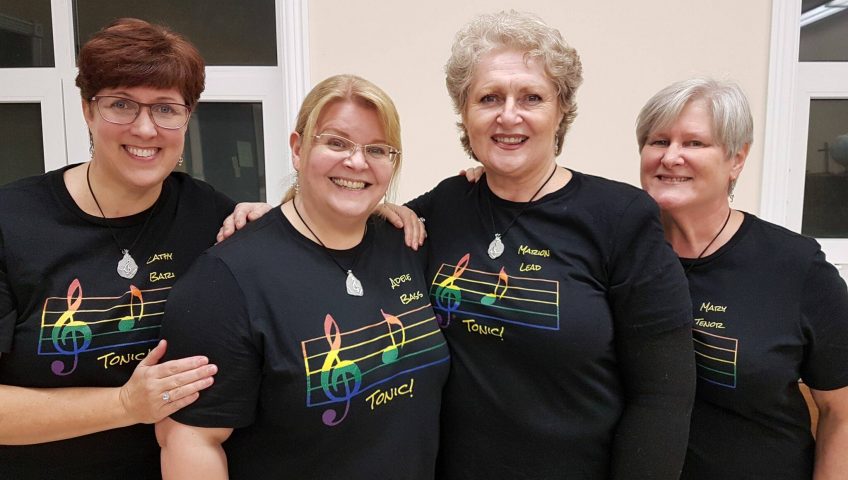 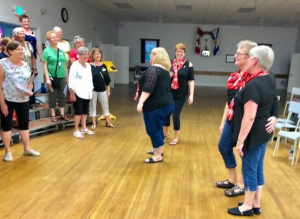 Tonic! has been the Atlantic Champion Women’s Barbershop Quartet every year since 2015, but there is more to this quartet than a cappella singing excellence. Recognizing their service to their barbershop chorus and beyond, members of their choral community have nominated Tonic! for Harmony Incorporated’s “Image of Harmony” Award.

Created in July 2012, Tonic! has gathered a long list of accolades at the Atlantic (Area 1) Championships. In addition to their four championships, the quartet received the Kathryn Ryan Memorial Trophy in 2015 and 2017 (most improved quartet based on score from previous year) and the Karen Gordon Memorial Trophy every year since 2015 (highest performance score). Always striving to improve their craft, current members Marion Fraser Pritchard (lead), Adele Merritt (bass), Cathy Hunter (baritone) and Mary Gareau (tenor), attended the Barbershop Harmony’s Society “Harmony University” in Nashville TN in the summer of 2017. Tonic! finished 2017 with their best showing ever at Harmony Incorporated’s International Quartet Competition, taking the eighth position in the coveted top ten.

Within the ScotianAires, the chorus to which all four belong, the women of Tonic! take on many leadership roles. Adele and Cathy are both assistant directors and section leaders for their voice parts. Adele has served as Music Chair and on the board of directors and Cathy is now the chorus librarian. Marion is a bass section leader, member of the board of directors and is Social Committee Co-Chair. Marion also serves as the Area 1 Quartet Co-ordinator. Mary just completed a very active few years as Music Chair and curator of the chorus history book and was Facilities Chair for the Area 1 contest for the last two years. These are just some examples of the duties the four have taken on over their time with the ScotianAires. And every chorus member knows that aside from their “official” roles, each of these talented women lead, encourage and support in many informal ways as well.

Teaching and developing the skills for and the love of a cappella singing is also a priority for this quartet. Adele and Cathy were responsible for preparing and implementing the “Find your Voice Program” for prospective new singers in the fall of 2015 and all four Tonic! members were involved in teaching this program. Adele and Cathy were also part of a group of musical leaders from the chorus that prepared a series of “Early Bird” training sessions that took place in the half hour before the chorus formal rehearsal and ran for two years. These were made available to any chorus member for their own development free of charge. For the past few summers Tonic! has led the chorus in ‘summer sessions’. Several of these have focused on encouraging quartetting, but the sessions have also helped members focus on vocal technique and just the fun of singing together!

As a quartet, Tonic! has also performed at numerous fundraisers and community functions including retirement parties, corporate events, at schools, at the Halifax Central library, and other venues too numerous to mention. They have also served as a demo quartet for Harmony Incorporated education classes, including Richard Llewellyn’s “Riser Placement for Quartets” class at the International Convention and Contests in 2015 in Verona, NY. For the past two years Tonic! has been the teaching quartet for the Area 1 Education days.

Area 1 director Linda Brehaut sums it up this way. “Area 1 is so pleased to have Tonic! represent us as our Area Champions!!! They have played a significant role in mentoring other quartets in the Area
through their willingness to teach, encourage and motivate….One characteristic of this quartet that stands out to me is their humble attitudes; despite being our Area champs, they are as quick to work with a novice quartet as they are to come along side our other medaling quartets, motivated as much by teaching as they are by learning.”

The chosen quartet will receive the “Image of Harmony” award at this year’s International Competition in Orlando, FL in early November. Thank you to Tonic! and all the nominated quartets for the many ways you nurture and spread the joy of a cappella harmony!